Homes and businesses that are larger and over 3,000 square feet in area usually require 8 or 16 channel security systems, rather than 4 channel systems. The difference between 4, 8, or 16 channel systems is that these numbers refer to the fact that more surveillance cameras are included in the system package. Surveillance systems with only 4 channels are adequate to use on properties or businesses with two entryways and a smaller yard. When more cameras are included with the system, they can be placed at various areas outside, and they can be used inside as well. They are basically the same as smaller systems in every other way, including the features that they offer.

Some 8 channel DVR security systems cost around $700, but the cameras on these systems does not always show clear images beyond about 10 feet. Systems with cameras capable of providing clear images at a distance cost more, usually around $1,200. However, there are many brands of security systems made, and some start at prices as low as under $200. Of course, cheaper models do not usually have the capabilities and features of more expensive models.

The larger 8 and 16 channel surveillance systems are often used for businesses. The 16 channel system with 16 cameras can be set up so that the entire store front and back are monitored. Systems can be viewed when the owner is away from the business with remote iPhone and Smartphone or Internet capabilities that most brands have. Some 8 and 16 channel models have 8.5 inch monitors that are part of their system. This is convenient because if it is used in a business, television screens are not usually available. However, it is sometimes difficult to see one screen on a monitor that is this small, much less 8 or 16 screens.

It is possible to add better pieces to security systems in most cases, and this is true of monitors. If a business is not able to see images clearly on the smaller monitor, a larger 15 inch color LCD model can be purchased. Some monitors are even larger, up to 19 inches for clearer viewing when the screen is divided into multiple screens. Generally, a camera in a larger channel system only begins recording when movement in the house or business occurs, so it is not necessary to monitor 8 or 16 channels at one time. On the other hand, many 4 channel systems record continually for up to two years.

The Defender SN301 8 Channel model and the Defender SN501 16 Channel model have many of the same features as the 4 channel models that they make. These include night vision cameras, remote access, and more. Not all systems have audio capabilities, but the REVO 16 Channel Indoor/Outdoor Video Security System with DVR, Monitor and 8 Security Cameras does have this capability. The system is activated with only one cable, and it has a 19 inch wide screen that is included. The 16 cameras have different capabilities. Four are for indoor use, 4 for either indoor or outdoor, and the remainder are for outdoor use.

The important first step to do when deciding to purchase a DVR security system is to look at what the different brands offer, regardless of whether you will ultimately buy a 4 channel, 8 channel, or 16 channel model. The characteristics of models, regardless of the channels involved, are very similar. It is the manufacturer and brand differences that consumers will want to look at. This is where the differences in surveillance equipment exist, not in whether the system has 4, 8, or 16 channels. 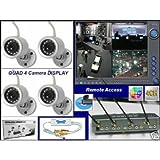 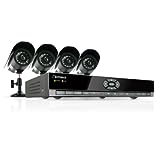